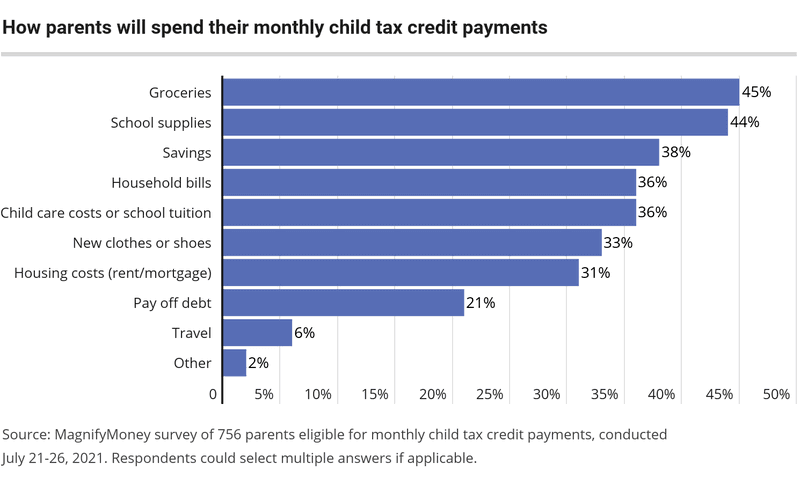 With the second round of advance child tax credit payments starting to arrive for eligible parents, MagnifyMoney asked payment-related questions to more than 1,000 parents with kids younger than 18.

The survey found that 82% of these parents with younger kids think the monthly payments should be extended past 2021. However, confusion remains around elements of the tax credit, including whoâ€™s eligible and whether people need to repay it when filing their 2021 tax return.

The American Rescue Plan increased the maximum child tax credit from $2,000 per qualifying child to $3,600 per child younger than 6 and $3,000 per child ages 6 to 17. (The coronavirus relief package also raised the maximum age at which a dependent child can qualify from 16 to 17).

Perhaps the most anticipated (and misunderstood) aspect of the expanded child tax credit is that eligible parents may now get half of the refundable tax credit early in the form of monthly advance payments. These payments began in July 2021 and run through December 2021.

When MagnifyMoney asked eligible parents how they plan to use the money they received through the advance payments, the most common responses were:

However, in breaking down responses by income level, those priorities shift. For eligible parents with an annual income of $100,000 or more, the top two planned uses of advance child tax credit payments are savings (46%) and child care costs or school tuition payments (44%).

Hereâ€™s a breakdown of how parents plan to use the money by the other income brackets:

While the second round of checks are now arriving, 4 in 5 parents told MagnifyMoney between July 21 and July 26 that they had received their first payment, which was due to go out July 15. That means 1 in 5 parents were still waiting a week later for the first payment, meaning some will likely also have to wait for their second check.

Those who didnâ€™t receive their first payment may need to update their checking account information with the IRS. The IRSâ€™ Child Tax Credit Update Portal allows parents to:

Future payments are due to go out on Sept. 15, Oct. 15, Nov. 15 and Dec. 15. The deadline to opt out of future advance payments or make changes to the taxpayerâ€™s bank account information is three days before the first Thursday of the month by 11:59 p.m. Eastern time.

When MagnifyMoney asked parents with children younger than 18 whether, to their knowledge, theyâ€™re eligible to start receiving monthly payments through the child tax credit program, 75% said yes and 9% said no. But another 16% said they didnâ€™t know, creating confusion.

Again, these numbers fluctuate when broken down by demographic. More than a quarter (26%) of people earning less than $35,000 a year arenâ€™t aware of their eligibility status, compared with 7% of parents with an annual household income of $100,000 or more. This could be because higher-income people can afford the advice of a tax professional or financial advisor.

Above a certain income threshold, the amount of the credit begins to phase out. For 2021, the child tax credit income limits are:

Once the parentsâ€™ MAGI reaches the second phase-out threshold, the Child Tax Credit amount is reduced by $50 for each $1,000 (or fraction thereof) of MAGI over those thresholds.

Another source of confusion stems from repaying the credit. Half of respondents tell MagnifyMoney theyâ€™ll have to pay back the money they receive through the child tax credit program when they pay their 2021 taxes.

Parents who qualified for the credit based on their 2019 or 2020 tax return but no longer qualify for the full credit could owe money to the IRS â€” or receive a smaller tax refund â€” when they file their 2021 return. Reasons this might happen include:

Yet, many parents arenâ€™t aware that they can opt out of advance payments. According to respondents, 10% of parents eligible for monthly credits would prefer to receive their credit in a lump sum at tax time but didnâ€™t know how to opt out or forgot.

Once again, these numbers are higher for lower-income people. Only 7% of people with a household income of $100,000 or more were unaware or forgot to opt out, compared with:

One thing most parents agree on â€” 82%, in fact â€” is that the monthly child tax credit payments should be extended past 2021.

The numbers are relatively consistent across income levels, but more people who identify as Democrats (90%) say they want the payments extended, compared with 76% of Republicans and 76% of Independents.

Extending the child tax credit may be popular with voters across the political spectrum, but it could be tough to get the bipartisan support for the tax increases that the Biden administration has proposed to help pay for the American Families Plan.

When eligible parents were asked how the monthly child tax credit payments will impact their mental health, savings and debt, the responses were consistently split by gender, with men believing monthly payments will have a bigger impact on all three.

So what is the best way for parents to use those advance payments? For parents who are behind on their bills or struggling to put food on the table, supporting the familyâ€™s immediate needs comes first. After that, here are a few ideas from LendingTree chief credit analyst Matt Schulz.

Use them to build an emergency fund

â€śWhether youâ€™re starting one or just topping one off, emergency funds are incredibly important,â€ť Schulz says. â€śThatâ€™s never been more clear than it is today. And even if you still have some debt, build that fund while youâ€™re paying down the debt. Otherwise, the first unexpected expense after you pay off your card will just go right back on that card, and youâ€™ll find yourself back in debt in a hurry.â€ť

Consider setting aside advance payments in a high-yield online savings account to earn interest on your emergency fund while keeping it accessible.

Use them to pay down debts

â€śAmericans have done a really nice job throughout the pandemic of being smart with their excess money,â€ť Schulz says. â€śFor example, theyâ€™ve used those funds to take a significant bite out of their credit card debt, and thatâ€™s a really good thing. Itâ€™s unclear just how long this trend will last since card debt has already started to climb again, but I hope it continues.â€ť

Use them for other savings goals

â€śSavings arenâ€™t just for emergencies,â€ť Schulz says. â€śTheyâ€™re for retirement, college, mortgage or car down payments, home remodels, dream vacations, weddings and countless other goals. Whatever youâ€™re saving for, the extra few hundred dollars can be a nice addition to your efforts.â€ť

If youâ€™re eligible to contribute to a health savings account (HSA), consider setting aside the advance payments to cover future medical expenses. As a bonus, contributions to an HSA are also deductible on your tax return, even if you donâ€™t itemize.

If you donâ€™t already have a 529 plan set up for your childâ€™s future education costs, advance child tax credits can be a great way to kick-start your savings. Depending on your stateâ€™s laws, contributions to the plan may qualify for a tax break on your state income tax return.

MagnifyMoney commissioned Qualtrics to conduct an online survey of 1,013 parents with children younger than 18, fielded July 21-26, 2021. The survey was administered using a nonprobability-based sample, and quotas were used to ensure the sample base represented the overall population. All responses were reviewed by researchers for quality control.

« How to Invest in Real Estate: 5 Investing Strategies What Are the Tax Benefits of an LLC? »